Cookies help us deliver our services. By using our services, you agree to our use of cookies.

There are several use cases where user accounts need to be copied from one wiki to another, e.g.

Merging two wikifarms
Wikifarms store user accounts in the metawiki database, which is shared by all wikis in the wikifarm. If the wikis of a wikifarm (or a selection thereof) need to be moved to another wikifarm, then a merge of the user accounts becomes necessary.

The process consists of a sequence of activities, described in more detail below:

Make a backup of the tables in TO that will be modified:

User accounts can conflict if FROM and TO have accounts with the same ids but with different data. This can happen if:

In some cases, not all accounts shall be merged. However, to keep the page revisions, discussions etc., user accounts cannot simply be deleted, so they have to be anonymized:

Merging wikifarms can be complicated, so it will generally be an iterative process. A script can automatize the most tedious tasks, and provide more security by allowing to (unit) test the merge on a test server.

There are several ways of implementing this:

A script was written for automatically merging the wikis of Museum für Naturkunde Berlin (MfN). The script implements the steps listed above in 4 classes:

Backuper
Create a backup of the metawiki.user table on the TO DB.
Resolver
Detect incomplete user accounts on FROM database, i.e. without login, password, name or e-mail; Check for conflicting user accounts on TO-database; Add a number of dummy accounts; Try to resolve any conflicting accounts by moving the accounts at the end of the account list.
Merger
Copy tables user_groups in the FROM databases to the TO databases; Copy tables user_newtalk, user_openid, user_properties, recentchanges, revision, watchlist FROM->TO; Find users which have been created in the FROM database after the TO database was copied; Copy an array of users FROM->TO;
Anonymizer
Lists all accounts on the TO database, which will NOT be anonymized; Anonymizes data from all users which are not to be kept.

The interaction between these classes is modelled in the following UML activity diagramm: 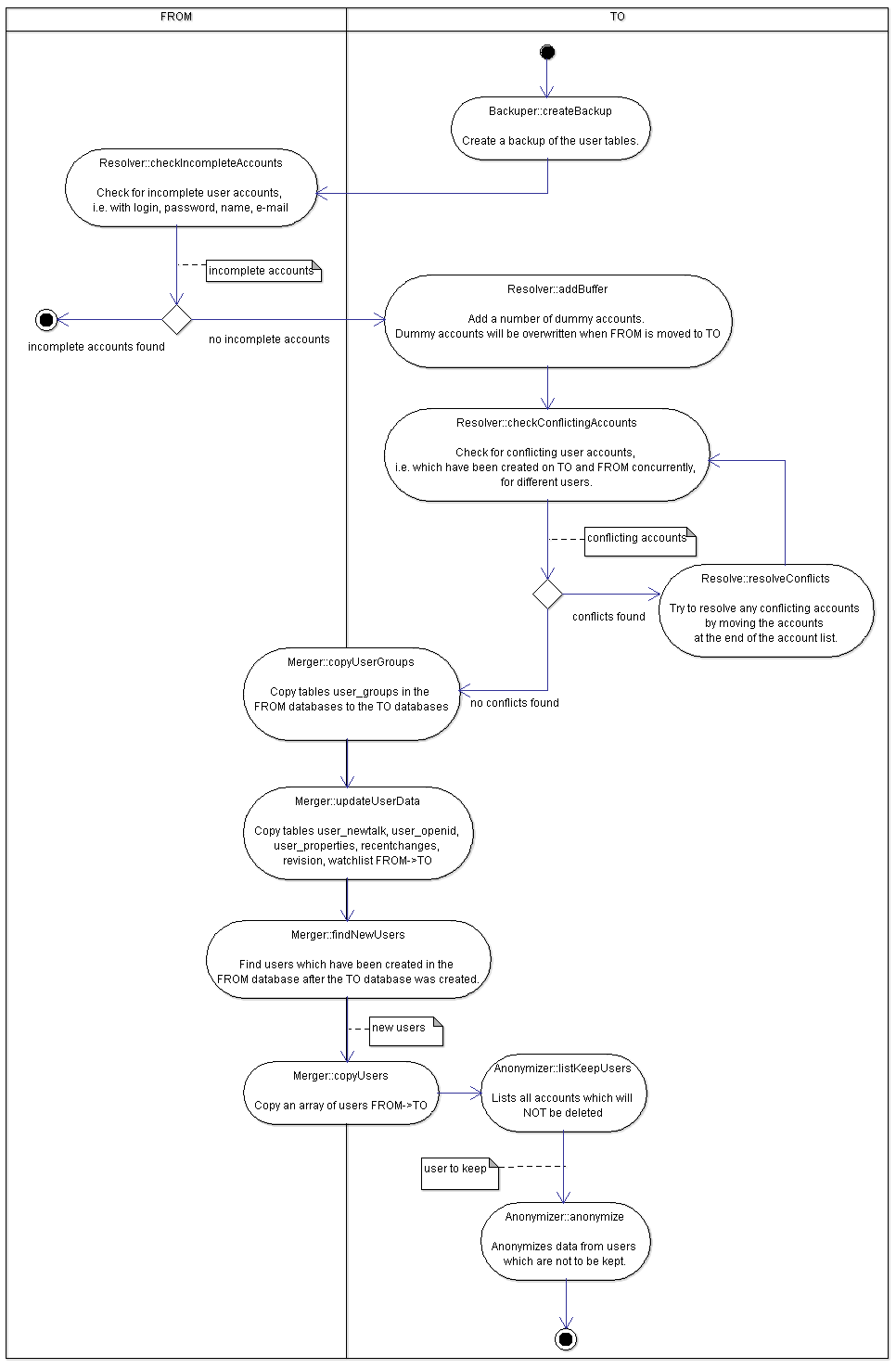